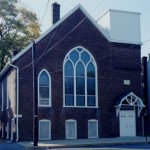 Having recently started thinking about faith again, I find myself remembering what seems like another life (or another person’s life) long ago, in which I was generally undecided in the matter of religious belief. I was a pre-teen, drawn to a local Southern Baptist church by the spectacle and the fellowship. And, if truth be known, by the enthusiastic singing and the excellent box lunches.

I had thought, then, of becoming a pastor, perhaps in the same way that many young people think of becoming a fireman. It looked like fun. It looked like it was important. It looked like most people liked ministers, so they must be popular. It was not long, though, before I became disillusioned in a possible future as a religious leader of this poor but musically talented congregation, or of any other.

As eleven turned to twelve, it struck my young mind that the sort of belief that I was learning made no sense. I had already rejected the gods of the Romans, and the Greeks, and the Vikings. Of course, that was easy since those gods, who had seemed to serve so many ancient people so well down the ages, were somehow clearly but false gods. However, that belief in those godly populations down the ages had so completely waned served to bring out the skeptic in me. If it was possible not to believe in several other sets of gods, was might it be possible to not believe in one more?

That tiny thought began to work on my young mind, and I started to examine more closely what I was being told. The anomaly that struck me first was how violent this “modern” god was, and how he seemed totally unable to end all of the suffering involved in the life of real people. I was told that he was good, and that he was all-powerful. Yet, I had but to look around myself and my small 1950s ghetto environment to see some of the horrors affecting those around me.

Poverty. Violence. Racism. Sexism. Alcohol. Drugs. Rampant stupidity. The list was almost endless. Had this god been both all-powerful and good, none of these things would exist. Nor would all of the wars, pogroms, and myriad historical atrocities been allowed to occur. No, clearly, a good and all-powerful god would have seen to it that his chosen people were not subjected to such things.

Yet many of my fellow human beings were obviously so affected, and the pain and suffering resulting from those social ills were plain even to me. The many books I was reading told me that these ills were everywhere. If this god had created us in his image, he was a terribly flawed being, and useless for any practical purpose besides. Those feelings formed the first wedge between organized religion and that long ago version of me, and set that boy on a spiritual journey that would last many years. Maybe I’ll relate a bit of that later…