Prior to 1769 and the first missions, likely 350,000 to a million native peoples lived in what is now California.  Five-hundred independent tribes spoke as many as one hundred languages or dialects-by estimates of linguists and anthropologists. There was great diversity in customs, rituals, story-telling, clothing and adornment, basket-weaving, and trading. In a land of plenty, peace was the norm.

By contrast, in1846 the diarist Titian Ramsey penned these observations: “At the junction of Feather river and the Sacramento we saw the remains of an Indian town, which a few years since contained several hundred natives, all of whom perished in one season by a tertian fever; their bones are now bleaching on the ground, strewed in all directions-in one of the skulls a bird has built its nest.”

A mere six-to-seven thousand natives remained by the last decade of the nineteenth century. The mission system collapsed, but Mexico then occupied “Alta California,” and later the Gold Rush attracted white settlers and troops, who supplanted the missions with Indian reservations. Fierce Indian resistance was quashed over time, and even peaceful clans were murdered en masse. In 1911, anthropologists were astonished to find, in the words of writer Theodora Kroeber, “the last wild Indian in North America”: this was Ishi, a member of the Yahi tribe, whose history Kroeber recounted in Ishi in Two Worlds. He was given a home at The Museum of Anthropology in San Francisco, where he died in 1916.

Mission Dolores, always teetering between sufficiency and famine, declined after 1820 and all mission lands were secularized by the Mexican government in 1834. While not solely responsible for the destruction of aboriginal cultures, the padres’ zealousness to save souls swept the initial shroud over the vibrant life thriving in the Bay Area. The thick populations of animals and birds were reported to be “fearless,” having not been brutalized by humans. 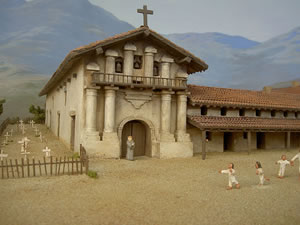 Outside the Dolores church is a model of San Francisco de Asís as it might have appeared in 1800-an artist’s conception, housed in a glass case. An adobe quadrangle occupies a marshy valley surrounded by green hills, softly rolling or in peaks. The stream depicted as flowing beside the church, was named by the padres for Our Lady of Sorrows, La Nuestra Señora de los Dolores, a name that became synonymous with the mission. All throughout the miniature landscape, two-inch figures are busy: children play, men load a cart, a padre waits at the church door. The cemetery fence frames fresh graves.

I see myself mirrored by the glass case. My body shadows the land and people like some modern-day Gulliver’s. Feeling a giant’s might, I imagine sweeping the landscape clean of the mission, and rediscovering a countryside that, in Gulliver’s words, “appeared like a continued garden.” In that fresh environment, flourishing when Congress signed the Declaration of Independence, would the stream named for the sad Virgin have had any name at all?

Sii (water) and kanpatytyan (my blood) are words paired in a Mutsun song once taught to children:

Traditional Mutsun lands occupied the area now bounded by Mt. Diablo, San Jose, King City, and Monterey Bay. Richard Levy, the linguist who recreated the children’s song, described the Mutsun language “returning” to him as he walked into “‘ama rumme,” known as Indian Canyon. Near Hollister, the canyon served as a refuge for Indians during California’s colonization.  At the canyon Levy saw chatytya (buckeye), yuukis (live oak), and remembered animals extinct in the region, ‘wassaka (condor) and hummuh (wolf). He heard old words renewed, “tumbling forth like a litany of saints sacrificed to something called ‘progress.'”

In 2004, Dolores hired its first curator with Indian ancestry, Andrew Galvin, whose Ohlone great-great-great-great grandfather was baptized at the San Francisco mission. In an interview at the mission, with the San Francisco Chronicle, Galvin said of his ancestor, renamed Liberato by the padres: “He was baptized in this very room. He is number 2,322 in the register of baptism. He prayed in this room. Here is where my family became Christians.”

To Galvin, the story of the “Mission Indians” isn’t tragic, but rather an epic of survival, which continues into the present day. Galvin, however, once studied for the priesthood, and remains a devout Catholic; thus his views must be considered within that context.

Any epic of survival by native Californians competes with another epic, a religious romance, within Mission Dolores, where the symbols, art, recorded history, graves, and roses allow a tourist to view human suffering-and even genocide-as narrative strains in the Christian story of salvation.