At the entrance to the mission cemetery, I hear traffic flow on Dolores Street, which parallels the mission but is blocked from sight by a wall landscaped with trees and shrubs. Tires drone, now a tailpipe or muffler drags on the road and clatters. Rap music builds until I feel its tremor that soon diffuses to echo. An engine’s high-pitched whine goes silent.

Immediately, I’m drawn to the pedestal upon which a stone Junípero Serra is depicted as strolling, head bowed. Nearing the statue, I notice that a rosary is strung like a garland around his shoulders. The long chain runs to his waist and down his left hip. Flush against his thigh is a dagger-sized cross, perhaps based on the twelve-inch crucifix that he supposedly clutched to his chest as he slept.

A woman strapped with cameras lumbers on paths among the gravestones. She approaches and I glance up at Serra’s image. Sighing, she kneels, her black camera masking her eyes while she takes aim. Given the sharp angle, the padre might appear as gazing down from the sky in her viewfinder. She fidgets and tells me, “A blind sculptor created this work. Isn’t that a miracle?” At last, she shoots. Snap, snap, snap, snap. 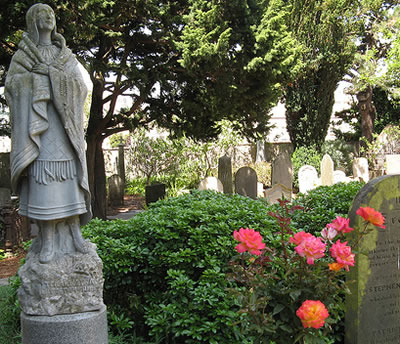 Wobbling to her feet, she zeros in on another statue: Kateri Tekakwitha, a famous Indian convert. “That Indian girl’s on my agenda,” she says, sauntering away as I edge closer to Serra, my shoe tips rustling gladiolas planted at the pedestal base. The padre’s face, I notice, is softly molded, even unfinished. The blind artist, mentioned by the photographer, had idealized the famous padre, rendering him as lost in thought, in the world but not of it, a crusader errant.

Serra’s walks were legendary, for he randomly trekked throughout Mexico and California, without provisions, all while suffering from ulcerated legs. These journeys, he said, hardened him for mission labor. He was an apostle forging the future, his personality as messianic as the current U. S. president’s. Serra once famously wrote: “Go forward and never turn back.”

By his own account, as he wandered the New World, strangers greeted him in desolate countryside, and offered him bread, water, and shelter. Once he had a hallucination of the Holy Family-Jesus, Mary, and Joseph-living within an adobe hut set among nettles and cactus, but shaded by three cottonwood trees. These tales had charmed me.

Tired, I sit on a sun-warmed bench and chuckle, watching the photographer fuss with one camera and then another, at the statue of Kateri. As she shoots, I pull from my backpack several mission publications, purchased and free, and set them down in a haphazard mosaic. What a clear, hot day! Rather than the usual salt-scented mist, the honeyed aroma of roses saturates the air. The fully opened rose petals float like pastel clouds among the cemetery greenery.

Breathing in their fragrances, I remember that roses delighted Serra. He wrote diary entries while inspired by cuttings dangling with blooms and buds. As he traveled north from Mexico, he recorded discovering wild roses in greater and greater abundance, until he found the queen of them all, the rose of Castile. This grand rose and others were cultivated by the padres to provide the missions with pastoral settings, like the one I now enjoy, a privileged space for meditation, soothing body and mind.

Refreshed, I pick up the four-page handout describing the mission, and skim its first paragraphs. My calm mood withers and I want to quarrel with the anonymous author, who claims that San Francisco-the city-was founded on June 29, 1776, when the first Mass was said “in the area.” The city’s founding, by this gloss, predated the signing of the Declaration of Independence. No. As the next sentence states, October 9 marked the mission’s-not the city’s-official founding. On that date soldiers erected the Cross and began the campaign for Indian converts. Why deliberately mislead readers?

That booklet aside, I open another by Most Reverend Merlin J. Guilfoyle, a former pastor of Dolores. At the main fold, stapled, I find a chapter about the cemetery, with black and white photos that include Kateri’s statue. Her sculpted clothing casts deep shadows of gray and charcoal. While not moving like Serra, her shoulders are lifted. Her mantle drapes her as snugly as wings. About the photo, Guilfoyle has written:

The image of the Venerable Kateri Tekakwitha, a Mohawk, is a symbol of California redskins, since she is on her way toward canonization and may be the first All-American saint. At her feet are engraved the words: “In prayerful memory of our faithful Indians.”

This too is misleading-egregiously so. Contrary to Guilfoyle’s stereotyping, the skin coloring of the native Californians varied from fair to deep mahogany. The missionary Juan Crespí wrote in his diary of meeting “gentiles mui rubios”-natives who were blond. Other diarists and authors noted that many Indians were “nearly black.” Kateri, a Mohawk, bore little resemblance to any of the five-thousand Indians buried at Dolores.

Tekakwitha was born in 1656 in what is now upper New York State. Her mother Kahenta was a converted Christian and her father a chief. They and her brother died from smallpox, a disease that scarred Tekakwitha’s face and nearly blinded her. An uncle and several aunts became her surrogate parents. In 1667, Jesuits were guests in her uncle’s lodge, where they proselytized Tekakwitha, and she took their message to heart. Refusing to marry, she asked counsel from a Jesuit who also baptized her with the name Kateri, a form of Katherine, from the Greek for “pure.” Afterwards, according to Catholic sources, she was persecuted-chased and stoned by her own people.

In 1667, she fled her village for a Canadian mission at Sault St. Louis, traveling two hundred miles on foot. At last she received Holy Communion and, according to sources, afterwards engaged in “extreme mortification”-going so far as to cut and brand her self a “slave of Jesus.”  She died at age 24.

Why does a statue of Kateri grace this mission cemetery? Guilfoyle claims she is “All-American,” a trophy figure of sorts. Looking around, I see no statues of the first Bay Area peoples. These dead are nearly anonymous, of course, their stories abbreviated to names and dates in the mission Registry.

Another mission pamphlet, Mary Boulé’s Mission San Francisco de Asís, unveils a portrait of “our faithful Indians,” and what they endured:

Throughout all the building [of Mission Dolores] Fr. Martin Landeata and Fr. Antonio Dante may have been excellent organizers and builders, but many people felt that the two priests were also very strict and perhaps unkind to the Indians. It is known that the tribe of Indians in that area was very hard to control. As a result, in the year of 1796 Mission Dolores had two hundred runaway Indians. That was almost 25% of those living at the mission. […] Most missions fed their Indians three hot meals a day. At Mission Dolores the Indians were given only dry grain.