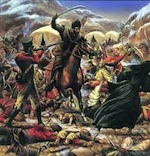 They invited some older folks to watch a war.
We sat uncomfortably on slat, wooden seats.
The noise was bearable off in the distance,
But a smell of body parts and putrid ammo,
Wrapping around us like unwanted caresses.

A soldier, dark-faced from the field visited his mother.
“Spit on this tissue,” she said, as mothers do.
And wiped him hard,  he still was not clean.

We saw troops advancing and some tossed around,
Flying up and falling, forgotten in the rush.
There were “casual—ties”,
A terrible word for humans,
In pain and plainly dying.

The litters were carried quickly out of sight,
But we saw them, endless, a military parade.

We had expected to see medals presented,
Meted out by officers in dress uniforms.
We didn’t expect such an ugly show.
It was free for us, didn’t cost a cent,
But it was no fun and no refreshments.

Still, you must all come to the war,
It’s the ultimate athletic contest,
Some seem to enjoy it.
Not the players we saw.