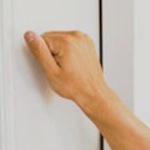 “No! ” Baby Jackson yelled, breaking the dead silence at the table.

Shirley Jackson shot up, snatched Baby Jackson from her fold-up chair and whisked her away into the living room. Seconds later, she reappeared and walked quickly back to her own fold-up chair.

“Now how many times I got ta tell ya, Shirl? ” Mister Jackson’s voice trembled. “Keep dat baby outta here on Sundays! ” He picked up a piece of toilet paper with shaky hands and dabbed at his showering forehead.
Everyone stared at Mister Jackson.

“Hush up now, Mistah Jackson! ” Shirley Jackson whispered loudly, her wide eyes darting around. “We ain’t got no time da be foolin’ roun’ wit’ all ya foolishness! ” She raised her shaky arm. “See now! ” She exclaimed, steadying her arm and looking at her new watch. “We ain’t got but ten minutes lef’! ”
Everyone stared at Shirley Jackson.

Junior Jackson picked up his plastic fork. Shirley Jackson smacked him promptly on the back of his head. “Boy! ” She whispered, her eyes bulging. “We got ta thank da Lawd! Got ta bless dis food! ”
The Jackson family closed their eyes and bowed their heads.

The Jackson family began shoveling breakfast into their mouths.

James Jackson knocked over his paper cup. Mister Jackson smacked him promptly on the back of his head. “Goddamit, Shirl! ” He exclaimed. “Ansa dat goddam phone! ”

Everyone stared at the ringing phone.

Shirley Jackson shot up and snatched the phone off the hook.

Everyone listened to the dial tone of the wildly swinging phone.

Everybody shot up and began scrambling.

Mister Jackson peeked from behind the sheet. “Lawd, ham mercy! ” He cried. “Hit it! ”

Everybody dropped to the floor.

“Lawd, please forgive…Shirl…boy! ” Shooting up off his stomach, Mister Jackson snatched off his belt and made for the hallway. “You cut dat light back on agin, boy! ”

“Ah! ” James Jackson shot up off his stomach and ran upstairs.

Mister Jackson turned and ran to the door.

Junior Jackson slowly slid away from the door.

Junior Jackson shot up from his stomach with a howl, holding the back of his pants as he ran for the stairs.

“Git back, Satan! ” Exclaimed the Witness.

Mister Jackson flew back to the floor, where he hit his head and promptly passed out next to Shirley Jackson.

The Witness stepped through the door. There was really nothing left. Spotting the card table and phone, the Witness started before looking down. “Praise God! ” The Witness exclaimed. The Witness bent over and removed Shirley Jackson’s watch then placed the Bible upon her chest. “In da beginnin’ dare was da witness, hallelujah! ” Standing, the Witness nodded at the two before closing the door.

“No! ” Baby Jackson yelled from the living room.