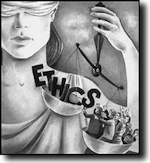 This third value espoused by the 2003 Humanist Manifesto is perhaps more complex than the first two, and requires what I see as a divorcement between the concept of ethics and the concept of morals. In its entirety, this third item reads: Ethical values are derived from human need and interest as tested by experience.

There is much that can be, and has been, said about this theory in the language of philosophy. Primarily, those discussions revolve around the concept of ethical naturalism and, of course those doctrines that believe otherwise, such as ethical non-naturalism, non-cognitivism, anti-realism, and error theory. There is so much discussion in this area, and so much of it involves the splitting of philosophical hairs that I will leave the research up to you; I left it in my wake years ago. Remember, what follows is simply the way that I have decided to look at it. Your mileage may vary.

I have made this issue a part of my personal private language in the most clear-cut way that I can. I have divided the field into two parts. The first I refer to as morals, personally defined as “those rules made and espoused by formal religions and governments, primarily intended to keep the population in line while turning a profit, in either money or power, on popular behavior.” I think that is fairly clear. Morals are rules made by people with their own agenda, without much thought about public good. Examples would be the first four of the ten commandments, which are intended solely to invest power in the hands of an elite clergy.

On the other side, I define ethics as “Rules defined by societies for the betterment of people, based on human experiences of positive actions and the scientific study of behavior to determine which actions are positive and which actions are negative.” You can see that I think of the first three of these Humanist virtues as building upon themselves; this third value also has a great deal to do with empiricism, including observation, experimentation, and rational analysis, as well as the liberal application of the scientific method.

There are, of course, areas in which morals and ethics cover the same ground. Both condemn killing and stealing, as an example, though arguably for different reasons. The vendors of morals, governments and religions, have exhorted more humans to the killing of other humans than any other single factor. Science has some guilt in this area via the invention of technology, from the crossbow to the nuclear warhead and other weapons of all kinds, that have been prominently been used by the religious and the powerful to make mass killings of humans beings possible.

As one would expect, there is a fair amount of other overlap. Many things which are unethical are also excluded by morals, though they seem to be excluded for everyone but those making up the morals. You don’t have to look too far past the politicians that make laws and big-money evangelists that espouse morals to see that many in those groups feel free to flout their own rules without a second’s hesitation. That is not to say that ethicists are incapable of breaking their own rules; they clearly are. It just does not seem quite as widespread among ethicists as it is among moralists.

I realize that the two words that I have decided to use represent a personal and somewhat arbitrary set of beliefs. However, the actions that those words describe, and the uses to which they have been put, are not arbitrary at all. The rules I have described as morals have been used throughout history by money and power brokers to extend their wealth and power. The rules that I have defined as ethics have a much better record, in my opinion. I am not recommending my shorthand version to anyone; feel free to do your own work on the subject.