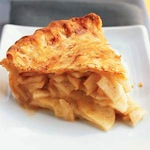 Yes, that’s what is says. Apple pie with pork gravy. Let’s look at those two things to make sure we understand them.

Apple pie: An apple pie is a fruit pie (or tart) in which the principal filling ingredient is apples.

If you are like most people, apple pie sounds like an excellent idea. But if you cover it with pork gravy, very few people would even give it a try. It is a truism that American marketers will gladly glue any two things together and call the result a new product. Even so, there are some combinations that are either meaningless or distasteful, or both.

Let us consider another combination: Religious Humanism. Hmmmmmm. All right, back to the dictionary.

Religious, from Religion: The belief in and worship of a superhuman controlling power, esp. a personal God or gods.

Humanism: an intellectual approach that refers to attaching prime importance to human rather than divine matters.

Yes, you have drawn the correct conclusion from the above definitions and the relative utility of putting them together. The world already has, or had, more than enough religion. There was no need to inject the exact thing rejected by Humanism directly into Humanism, and call the result Religious Humanism. The two are polar opposites.

Yet, that is exactly what the UUA has been trying to put on our plate for a number of years. It was a term invented by religious apologists in the form of philosophers. And it is, oddly enough, the form of humanity the UUA tries to serve up on their Web site and in their literature. It is one of those ridiculous, grotesque and misleading terms that ultra-conservative true believers love to use, practically as repulsive as “Pro-Life.”

And like “Pro-Life” tries to force more logical thinkers into the “Anti-Life” corner with no more than a trick of words, “Religious Humanism” attempts to cloud the issue of Humanism with a sufficiently confusing definition that it becomes difficult for the common man to pick the logical truth out of the devious lies. Another example is “Intelligent Design,” invented by that same crowd to try to discredit Evolution when Creation theory began to seem truly ridiculous.

It seems clear that the followers of these other confused, antiquated, and unfounded less-than-theories have crept in under the edge of the UUA tent, and are plying their illogical use of groundlessly invented, patently ridiculous polemics to the members of the UUA. It seems to me that this is reason enough, without recourse to all the other relevant facts, to send the current leadership of the UUA packing.