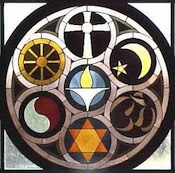 Religions are nothing but pillars of dogmas,
Built on the soil of faiths, cemented with beliefs,
Given the mosaics of religious traditions,
Built to last till the end of the world.

They built a house on the top of the pillars,
Called it a church, mosque and synagogue,
Temple, stupa, alter, pit and so many others,
To put on a figure they called their God.

The Christians with Christ, the Muslims with Allah,
The Hindus with Brahman, the Buddhists with Buddha,
Countless others with countless and countless names,
Worshiping their Idols, following their Scripts.

The six pillars of religions are always the same,
Faith, belief, trust, obedience, prayer and practice,
Follow the dogmas, obey the rules, no matter what,
That defines you and your existence in the world.

All religions are basically the same-
Dark alleys of blind faiths and dogmatic beliefs,
Not opening brains to think, mouths to ask,
To question, to inquire, to search and to learn.

Religions are nothing but all human prejudice,
Crying to a Superman having Superpowers,
To make their improbable dreams come true,
In a twinkle of an eye whenever they want.

Humanity is the best religion with all its humanness,
Compassion, love, sympathy and all the fellow feelings,
No superman and superpowers can exceed that,
With all their imaginary strengths and powers.

Religions are opium, narcotics to the brain,
To keep you delirious, unconscious of yourself,
Your brains fried, mind stupefied and dumb,
Stripping you of all sense of humanity al large.

Your conscience is the real religion that guides you right,
Through all the thick and thins, good, bad and dark,
That gives you the humanity, the nobleness of mind,
To be human and humane is the best religion you can find.