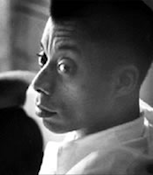 “Christianity has operated with an unmitigated arrogance and cruelty — necessarily, since a religion ordinarily imposes on those who have discovered the true faith the spiritual duty of liberating the infidels.”
“If the concept of God has any validity or use, it can only be to make us larger, freer, and more loving. If God cannot do this, then it is time we got rid of Him.”
— Baldwin, James

James Baldwin was an African-American novelist, short story writer, and essayist, known for his novel Go Tell it on the Mountain. Most of Baldwin’s work deals with racial and sexual issues in the mid-20th century United States. His novels are notable for the personal way in which they explore questions of identity as well as for the way in which they mine complex social and psychological pressures related to being black and homosexual, well before the social, cultural or political equality of these groups could be assumed.

Baldwin was born in New York’s Harlem neighborhood in 1924, the first of his mother’s nine children. He never met his biological father and may never have even known the man’s identity. Instead, he considered his stepfather, David Baldwin, his only father figure. David, a factory worker and a store-front preacher, was allegedly very cruel at home, which the young Baldwin hated. While his father opposed his literary aspirations, Baldwin found support from a white teacher as well from the mayor of New York City, Fiorello H. LaGuardia.

His most important source of support, however, came from his idol Richard Wright, whom he called “the greatest black writer in the world for me”. Wright and Baldwin became friends for a short time and Wright helped him to secure the Eugene F. Saxon Memorial Award. Indeed, Baldwin titled a collection of essays Notes of a Native Son, in clear reference to Wright’s enraged and despairing novel Native Son. However, Baldwin’s 1949 essay “Everybody’s Protest Novel” ended the two authors’ friendship because Baldwin asserted that Wright’s novel Native Son, like Harriet Beecher Stowe’s Uncle Tom’s Cabin, lacked credible characters and psychological complexity.

Baldwin, like many American authors of the time, left to live in Europe for an extended period of time beginning in 1948. His first destination was Paris where he followed in the footsteps of Ernest Hemingway, Gertrude Stein, F. Scott Fitzgerald, Richard Wright, and many others. When Baldwin returned to America, he became actively involved in the Civil Rights Movement. He marched with Martin Luther King, Jr. to Washington, D.C.

During the early 1980s, Baldwin was on the faculty of the Five Colleges in Western Massachusetts. While there, he mentored Mount Holyoke College future playwright Suzan-Lori Parks, who won the Pulitzer Prize for Drama in 2002. Baldwin died of cancer in 1987 at the age of 63.

“The price one pays for pursuing any profession or calling is an intimate knowledge of its ugly side.”
“I love America more than any other country in this world, and, exactly for this reason, I insist on the right to criticize her perpetually.”
“All of Africa will be free before we can get a lousy cup of coffee.”
“People pay for what they do, and still more for what they have allowed themselves to become, and they pay for it, very simply, by the lives they lead.”
“Artists are here to disturb the peace.”
“Everything depends on how relentlessly one forces from experience the last drop, sweet or bitter, it can possibly give.”
“Ignorance, allied with power, is the most ferocious enemy justice can have.”
“All roles are dangerous. The world tends to trap you in the role you play and it is always extremely hard to maintain a watchful, mocking distance between oneself as one appears to be and oneself as one actually is.”
“Life is more important than art, that’s what makes art important.”