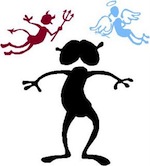 I recently attended a talk by Austin Dacey, of New York’s Center For Inquiry. He has a Doctorate in Applied Ethics and Social Philosophy. His book, The Secular Conscience – Why Belief Belongs in Public Life, was published in 2008 and has received wide attention.

Dacey began with a Bible reading: the story of God commanding Abraham to sacrifice his son, Isaac. Abraham prepared to obey. Isaac was saved in the nick of time by an angel who said, “Never mind, it was just a test.” This story is usually read as one of faith and obedience. But Dacey takes a different lesson: to be pleasing to God, Abraham’s action would have to have been not just obedience qua obedience, but a reflection of Abraham’s judgment that obeying would be the right thing to do. And this must mean there is a source of rightness outside God’s command.

Some people ask, “What would Jesus do?” But Dacey suggests the right question is “Why would Jesus do what he would do?” That, he said, is what Socrates would have wanted to know. He noted that when confronted with a proposed action deemed holy and loved by the Gods, Socrates asked his best question: is it holy because the Gods love it, or do the Gods love it because it is holy? Anyone who thinks morality is based on faith gets into trouble whichever way they try to answer that question.

The better solution, per Dacey, is that conscience comes first; and its source must be secular, not religious. Any religious notion of ethics must actually proceed from a deeper underlying secular moral sense. If you do follow the commands of religion (as in Abraham’s case), you do so because you have made a judgment that that is the right path; and that initiative judgment must stand apart from religion. You can’t get it from religion; that would be circular logic.

Dacey’s book mainly concerns his view that secular liberals are being undone by their own idea that religious matters ought to be kept out of the public square, and that matters of conscience should be separated from state power. Thus, they are inhibited from directly challenging the public assertiveness of religionists, while religionists themselves feel no such inhibition. We see the problem most vividly in issues concerning Islam. The Islamic world has mounted a forceful campaign to delegitimize anything critical of Islam as defamatory and an impermissible abuse of freedom of expression. And, to an appalling extent, Western secular liberals are knuckling under to this. Thus, for example, the UN’s human rights panel has now instructed its press freedom watchdog to be concerned not with curtailments of press freedom but, rather, “abuses” of press freedom.

Dacey concluded his talk by pointing out that we Americans actually have our own “testament” – consisting of texts such as Tom Paine’s Common Sense, the Declaration of Independence, the Gettysburg Address, and, of course, the United States Constitution, which invokes its own set of moral objectives: to establish justice, insure domestic tranquility, promote the general welfare, and secure the blessings of liberty to ourselves and our posterity. Now that’s holy – gods or no gods.

Originally published on The Rational Optimist.