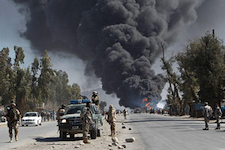 On the 21st of February, soldiers disposing of tools used by Afghan prisoners to exchange messages dumped a large volume of papers and books into a garbage pit to be burned. Amongst the texts were a number of Qurans. A superior, noticing the incredible error, doused the fires to retrieve what remained. But too late. Passing Afghan workers had spotted the thoughtless gesture, and within the day riots had spread across the capital. Over the past weeks protests have erupted across Afghanistan, with dozens dead, protesters killed by Afghan soldiers in clashes, or by explosions set off by the Taliban keen to gain from the violence and new-found religious fervour in the wake of the incredible PR error. Anti-Americanism has received a huge boost, and the deaths have highlighted again Afghanistan’s inability to secure the nation alone.

The question which has emerged from this violence to a secular, western, perspective is how a few books could possibly be worth the deaths which have followed. Particularly in western and northern Europe, where the faithful have become a minority, the idea of having their family killed as revenge to an act they did not commit, over a collection of culturally significant books, is one which is appalling and incomprehensible. It can be mapped to the western consciousness by imagining the pain suffered by having a member of your family or a close friend shot as you watched… and then multiplying this pain again and again. The horror and sickness of such seemingly meaningless death does not translate across the cultural divide, and this psychological divide defines the modern western/Islamic conflict.

Western Europe and the US have not encountered any warfare upon their home soil in half a century, their populations by and large have no personal experience of what it is to be affected by war. By contrast, the Middle East has been torn by war on a constant basis for centuries. The effect this has upon the two populations cannot be underestimated. To be traumatised by violence, death, torture and rape to oneself and family members leads to a mental state that those who have never experienced such events cannot understand, one which can last for a lifetime. Studies on Israeli teens who had experienced the death and destruction of rocket attacks when young showed that they bore signs of four or five post-traumatic symptoms two decades after the event.

The effect of being scarred by trauma again and again has consequences those in the west will never understand, ones which clearly did not factor in their decisions to go to war in the region. The effect of being traumatised by violence repeatedly is a numbing to death and violence, and a normalisation of it. Violence becomes not a horrific last resort as imagined in western societies, but part of ones inevitable future. More so, it results in a sense of a loss of control and identity to people who’s lives are wrecked by the uncertainty of the chance of being wiped from the earth by an IED at any moment.

Extremist religious violence is violence which emerges in these conditions of trauma and hopelessness. It did so in the wake of the bloody Irish civil war, the crushing of Chechen separatism in Russia, and in the many wars of Afghanistan. Fundamentalist religion opens its arms in a welcoming embrace of control and a master plan of a God which is above the random violence of a traumatic reality. It imposes absolute rules, a community, and the sense of absolute right to individuals who’s lives have been shocked. In the Christian images of hell and the fate of blasphemers, and the Islamic verses on the treatment of heretics, there is reason behind the use of violence to avenge the trauma an individual has suffered.

Fundamentalist religion is a very comforting refuge to those scarred by violence. It gives them order, community, reason and a self-righteousness in their superiority over those who have visited violence against them. This is an allure which cannot be understood by those who have not only never experience such trauma, and have never come across someone who has. It is one impossible to avoid in a region torn by random death by IED or Drone. Western Europe has emerged from the shadow of religious or ideological extremism only through the end of violence enforced by the spectre of mutually assured destruction, one which does not yet lie over the Middle East and sub-Saharan Africa.

NATO now faces a very dangerous situation. Their PR failures has made them the target of violence by fundamentalist groups who need someone to blame, someone to release their anger upon of the trauma that has been inflicted upon them. However, NATO is one of the smallest killers in Afghanistan, accounting for only a small minority of civilian deaths and killing Taliban members only in proportion to their own losses. The challenge they now face is weathering the storm of violence long enough to end the violence as they managed to some extent in Iraq. In Iraq the incidence of violent deaths dived to only a quarter of their peak numbers between 2006 and 2008 and continues to fall. Only by bringing a halt to the cycle of trauma in Afghanistan through intervention of a superior military force can the violence be stopped, and the allure of religious violence be ended.

But Western audiences, as distanced as they are from the trauma of the Middle East, do not understand the violence. They do not understand the need for some casualties to save a nation on the brink of collapse into a hell upon this Earth. In the face of such public opposition, NATO can only stay so long. Their task lies in staying long enough to complete their work, without threatening their ability to intervene once more should another state become trapped in the cycle of trauma, and drive hundreds more to plot 9/11 part two.

Originally printed on A Third Opinion.