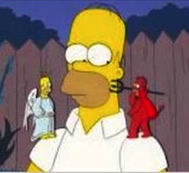 Last night I participated in a debate on this topic, at a local college; there were representatives of five different religions, and I spoke for the humanist viewpoint. Here is my opening statement:

The French scientist Laplace wrote a book about planetary physics; and Napoleon asked him why it didn’t mention God. Laplace replied, “Sir, I have no need of that hypothesis.”

We humans get morality first from our human nature, developed through biological evolution, and second, from our thinking minds. Religion isn’t necessary. We have no need of that hypothesis.

For a hundred thousand years we lived in small tribes or bands, in extremely challenging environments. Survival did require competition, aggression, and so forth. But it also crucially required a great deal of social cooperation and even altruism within a group. People who worked together and helped each other could get by; a tribe where it was “every man for himself” maybe not.

That’s why our brains evolved to make us feel good when we do good deeds, and shame and guilt otherwise. We are social animals programmed to crave the approval of others. We also have built-in empathy, in what’s called “mirror neurons” for feeling each other’s pain. We have strong instincts for compassion, gratitude, loyalty, fairness, etc. That’s morality; it’s actually a natural emotion.

But it’s not unique to humans. Other animals, especially our closest relatives, show similar if rudimentary moral instincts.

The other source of morality is our thinking minds. Lately it’s popular to debunk the idea of human rationality. Well, of course we’re not perfectly rational, all the time. However, we obviously deploy our reasoning faculty every minute of our daily lives, and our technology and social institutions are built on such rationality.

So — how do we get morality from rationality? Why not just act from pure self-interest, wouldn’t that be coldly rational? Actually, no. Because such behavior would quickly be defeated by the self-serving actions of other people. For example, if loans are not generally repaid, nobody would lend. But if we take into account the interests of others, then everyone is actually better off. This is enlightened self-interest. It’s rational morality. Most of us figure it out.

We also understand that other people have minds and feelings similar to one’s own, and similarly value their lives. Such rational thought likewise gives us the essence of morality – promoting human life and maximizing its quality.

Ask yourself this: if you suddenly found out there is no God, would you rape, steal, and murder? Of course not. Because religion is not the true source of morality. Religion merely codifies it. We’d be no less moral if we’d never invented religion.

Look at European countries like Norway or Denmark, where religion has almost disappeared. Have they descended into barbarism? They are among the world’s most orderly, ethical societies. Meantime, prisons are filled with religious believers.

Some say morality is a simple matter of obeying God. But following orders is not always right. (Remember Nuremberg?) The Bible says disrespectful children should be put to death. Why don’t we do it? Because, again, we have deeper sources of morality.

Simply following religious dictates divorces your actions from conscientious weighing of their consequences. That’s true morality — working it out for yourself. That’s what nonbelievers do. It’s better than toeing the line out of fear of Hell. And ethical precepts are more soundly based on our reason, and reality, than on faith, which of course means belief without evidence or even against evidence. Any ethics derived that way has to be faulty.

The theologian and ethicist Reinhold Niebuhr said, “Religion is a good thing for good people and a bad thing for bad people.” But the problem comes when you imagine you know what God thinks, and believe you’re following a holy path—then, almost anything can be justified or excused. That’s how we got Muslim suicide bombers, men flying airplanes into buildings, all the centuries of massacres inspired by Christian faith, etc., etc., etc.

Religion too often breeds demonization of other people. Mainstream Christianity has traditionally taught that non-Christians burn in Hell forever. I’ve never heard a more immoral idea! Not to mention all the thousands burned in this world. Religious faith can be a set of ethical blinders, overriding, distorting, and subverting our inborn moral instincts. That’s why philosopher John Stuart Mill called religion “a great moral evil.”

Previously published at The Rational Optimist