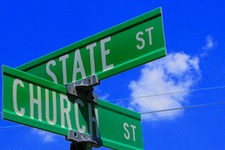 Former Republican Presidential hopeful Rick Santorum made an impassioned pitch in favor of rejecting the famous doctrine of the separation of church and state.  He made his position clear on the ABC-TV program, This Week, on Sunday, February 26:  “I don’t believe in an America where the separation of church and state is absolute,’’ Santorum noted. “The idea that the church should have no influence or no involvement in the operation of the state is absolutely antithetical of the objectives and vision of our country.’’

Of course the exact statement he made is sadly hyperbolic since no one has ever advocated that church should have no influence on the operations of the state or government.  Religion clearly has influence through its role in the formation of individual opinions which in a free country play a crucial role in guiding public affairs.  As a matter of the faith of the citizenry, religion’s involvement in public affairs is ubiquitous.

One crucial idea behind the church-state separation, however, is that when it comes to public affairs or the official edicts of governments in free countries, these are not supposed to be based on church policies or doctrines but on the secular ideas of the country’s constitution, ideas that any human being is capable of grasping and criticizing, no matter his or her religion.  Let us see what lies behind this position and why it is sound.

When we discuss political economy, resting one’s case on faith places one’s ideas on wobbly foundations. By “faith” is meant a mode of belief based on the will to accept or commit, often despite systematic evidence to the contrary, or on belief not based on supporting evidence of the sort available for systematic, organized, public scrutiny. Indeed, faith is often taken by its champions and adherents to be something extra rational. Its merit lies, supposedly, in the fact that it is not based on evidence or reason but often contradicts both. Thus it is harder to sustain–and it is this difficulty that is supposed to make it a noble achievement to have and keep such a faith. If it were a conviction or belief based on evidence and reason it would lack this element, or so some theologians and religious leaders maintain.

The problem with faith is that, especially concerning matters of public policy, but even vis-a-vis personal and social problems, it is rather hopeless to expect congruence or agreement to arise among very different people with different experiences, traditions, and religious convictions which are based on faith. How, then, can faith be used to reach common or public convictions?

Faith is a very private mental disposition. In many theological systems it is supposed to be at God’s discretion whether someone will have faith or not. Augustine, for example, saw it as something that people acquired by the grace of God. Within this tradition, human beings are in a sense impotent when it comes to gaining faith—they are either graced with it or not.

But in matters of importance to all people, to the citizenry as a whole, it is futile to rely on such a method for reaching understanding and convictions. Indeed, there is a virtual guarantee of discord when faith is invoked. It may be appreciated, in this light, why there are nearly 4,200 different religions in the United States alone and why so many of the public conflicts around the globe find much of their source in religious views, and why religion is something that many people refuse to debate or argue (since, again, one either has or doesn’t have it).  The religious based conflicts across the globe occur mostly where religion and the public sphere are thoroughly intertwined.

To be sure, religion has been present for most of history. As George Orwell illustrates in his classic book and indictment of communism, Animal Farm, there is always a priest or minister around no matter what politics happen to dominate (represented by the omnipresence of the raven through his story). Thus, Roman Catholic and other churches didn’t even collapse under the self-proclaimed atheistic system of communism and managed to live peacefully within others.

The presence of religion in nearly all epochs and societies, however, is no argument for the truth of much of what these religions proclaim—after all, most societies adhere to widespread superstitions, such as astrology, as well as all kinds of dubious practices and institutions, which arguably rest on various false beliefs about the world and about how we all should live. The pervasiveness of these doesn’t render them true.

Nonetheless, it is probably because religions consider a good deal of what is important to human life, like codes of conduct that resonate so sufficiently with common sense, that they have staying power. And there is also the plain fact that secular philosophies haven’t been sufficiently attentive to ethics or morality—often claiming that these, too, along with the descriptive parts of theologies, are myths. This isn’t a credible view and religions have thrived by holding that they alone can provide people with ethics for guiding their lives.

There are also many heroic acts by religious people against various forms of tyranny. But these don’t render the general outlook of the heroes true. For example, Roman Catholic Cardinal Mindszenty of Hungary opposed the Stalinist regime in his country, invoking grounds that any secular liberal thinker could appreciate. Lord Acton’s liberalism isn’t especially wedded to religion even though he himself was Catholic. Although the real concerns many religious people have about tyrannies and totalitarian regimes needn’t be based on any specifically religious convictions—unless, of course, everything one believes rests on those—the ethical leadership provided from within religion has been significant in fighting such systems.

The bottom line is that what makes us human, most of all, is that we use reason and need to do so to make headway in our daily lives. In a country fit for human survival and for thriving, religion can’t be a basis for public policy. That’s why resting beliefs on the common capacity to reason, instead of on faith, and the need to discuss with others how one should lead one’s life, has greater promise for peace and justice, especially in organized human communities inhabited by very different people.

So, one crucial reason that religiously based public policies have dubious merit is that their justification can’t be examined along lines available to us in virtue of our humanity alone. A human community, as opposed to a sectarian or religious one, can’t rest its institutions on what arises from faith—especially not if those institutions aim to be considered fairly and openly by all those who might be citizens, including members of very different religious denominations as well as many who lack any such membership.

Nonetheless, in a multicultural, highly diverse society such as those in most of the advanced civilizations today, especially the famous melting pot that’s the United States of America, the realm of public affairs cannot be approached from a religious viewpoint.  Doing that would necessarily result in constant internal conflicts that are in principle unresolvable.

Accordingly Rick Santorum’s call for what would amount to a substantially theocratic society must be rejected by all reasonable citizens, especially those who realize that religion is vital to their own lives regardless of how little that religion is shared by their fellow citizens. The best defense of freedom of religion and peaceful opposition to it is not to allow any particular faith to become dominant via the political system.