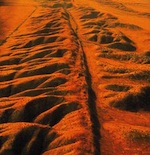 Have you ever played the game called Telephone?  If you have, you know how garbled the message can get as it moves along.  When I was a child I was taught that God came to earth in the form of a man called Jesus in order to save us from our sins – that because of him we can go to a wonderful place called heaven when we die.  Since then I have come to believe that the message Jesus gave got garbled.

The first inklings that teachings of my church could be wrong were encountered in Genesis and its stories of creation.  “Let there be light.  Let the earth bring forth the living creature after its kind.  Let us make man is our image…and it was so.” Genesis 1 * All that in seven days sounded like magic.  My public school teachers explained earth’s creation in a different way.  They spoke of something called the Big Bang that formed our planet.  Plants, animals, and people all evolved over time.   The discrepancy between the two explanations bothered me so much that I even asked God that if our church was wrong,  he would show us where.  As I grew older I began to search for the answer myself.

I learned that as men developed, they soon came to believe in a higher power.  They saw it in the floods, fire, and storms and were frightened.  They made up rules which, if followed, would bring them into a safe relationship with this power.  They named the power God and referred to it as Him.**  The variety of religions which have  developed attest to men’s search for that connection.  Events in their lives were interpreted as God’s dealings with them.  The stories were told over and over and eventually recorded on scrolls – copied and recopied – many ending up at last in a collection called The Old Testament.

Then along came Jesus proclaiming that “the kingdom of God is within you,” Luke 17:21, and the way to connect to it is through love.  After Jesus’ death, people began to write about his life and teachings.  In John 14:3 Jesus is quoted as saying, “I am the way, the truth, and the life:  no man cometh unto the Father but by me.”  Men began to interpret that to mean we no longer had to sacrifice our daughters or cattle in order to be in God’s good graces.  They took it to mean that Jesus is the way because his suffering and death earned our forgiveness.  God would give it to us freely.  Freely – that is, if we repented and believed that Jesus was God.  It was still the same old message – do something to placate him.  Was that really what Jesus meant to say?

Scoffers are quick to point out that there is no God who loves us.  If there is, why does he allow so much evil in our world and lives.  But if we concede that we just evolved, we begin to understand that bad things happen.  Some are part of evolutional mutations.  Some are part of nature.   The earth has weak spots which sometimes crumble and split, sending tremors – shaking buildings and people who have settled above them.  Hot spots erupt and send burning lava down mountain sides.  It’s been said that the flutter of a butterfly’s wings can affect weather far across the planet.  We are present when wind blows into a destructive hurricane or tornado as much as we are present when a rose bud opens and reveals its beauty to us.  These are all natural phenomenon.

According to Darwin we evolved into sentient beings whose instincts are survival.  Maybe what we call sin is the product of our deeply ingrained self survival instinct – knock that person down, lie, cheat – anything that helps.  But Jesus invited us to survive through love.

Perhaps the idea of God is merely one of the by-products of evolution.  A man born before his time is crucified – one way or another.  Perhaps Jesus was a mutation in the span of evolution – taking the “good gene” to perfection – living out his message of love.  Showing that the way to life is love.  Perhaps Man will yet survive.

*    All Bible references are from The King James Version
**  For the sake of convenience I will use these common tags.