I – The Chapel, An Odyssey

The soured wood of the church doors flavors the air. Stone tile cools my knees. I unzip my forest green backpack and remove a notepad wedged between books and my rolled-up windbreaker. On the dusky burgundy squares, my pack is a lump disrupting the floor’s diamond pattern.

Until minutes ago, I was weighed down by that pack, searching for Dolores and Sixteenth streets-the location of San Francisco de Asís, more commonly known as Mission Dolores. Hiking an incline, southwest on Market Street, I passed cafes serving fresh lobster bisque, sex and novelty shops blaring rhythms ground out for blue movies, surplus stores hawking camouflage, ladies-wear boutiques, German tourists in spandex, panhandlers huddled on sidewalks wet from last night’s sanitation, and street blues musicians. Their husky vibe was sheered by wind gusting toward the bay. All my notebooks, books, clothing, and toiletries weighed down on my lower spine. Huffing as I trudged, I was a mule, I was a pilgrim.

I had first read of Mission Dolores while at home in Texas, by discovering a web site with a virtual field trip: point and click and jpegs emerged of exteriors, interiors, and artistic renderings of the mission over time. Through library research I learned that Dolores was one in a string of twenty-one missions along the California coast from San Diego to the Bay Area, built and then financed by the Spanish Empire, during the years 1769-1833.

Padres of the Franciscan Order hoped to convert native peoples, in the hundreds of thousands, to Catholicism-within a single decade. Along with conversion came genocide, and the various Indian tribes-Miwok, Ohlone, Pomo, Rumsen, and others-lost much of their populations to imprisonment, torture, and disease.  Dolores, a word for sorrow, seemed a more appropriate name for San Francisco de Asís, where the death rate for Indian children was 880 per thousand, by one estimate, in 1806.

I hoped to see something of Dolores’ ruins, when at last I arrived, out of breath, at the mission’s modern bookstore. From the clerk I learned that all that remained of the original mission were the church and graveyard. The patio, the padres’ housing, the monjerio for inditas (young Indian maidens), the tayunque for boys, all the workrooms, and the prison were long ago rotted away and demolished. Thus I began my tour in the shadowy coolness of church, where I gratefully dropped my backpack to the floor. 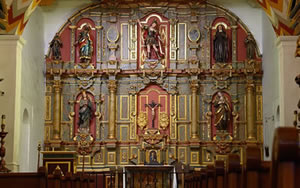 Making notes, I now study the reredos, opposite me, on the western end of the nave, behind the altar. Adorned with statuary, the reredos is of the Baroque style, with intricate shapes and moldings; it rises to the ceiling, where it is crowned with a wreathed cornice. I’m somewhat surprised at the green cast to its gold-leaf lacquer, as if this festooned slice of art reflected a sylvan setting. The sheen from the gilding burnishes the otherwise white church walls.

The rafters and beams of the church ceiling are adorned with zigzags of white, gray, mustard, and cinnabar, bright tones, crisply edged, replicating the designs painted with vegetable dyes by Indian craftsmen during the 1800s. Bronze chandeliers cast warmth on the stripes; each sprouts eight bulbs, shaped like a plump flames. 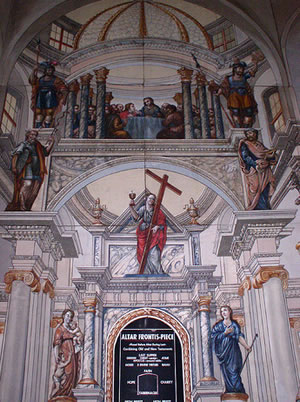 To my right is an altar frontispiece, a display consisting of paintings as large as theater backdrops. At certain times in the liturgical cycle, the frontispiece was used to hide the altar and reredos. The paintings depict Corinthian columns branching into structural ribs that fashion an apse tiered by cornices and lintels. The upper levels of the rendered building feature a semi-circle of windows and a dome that roofs a version of The Last Supper. On the lower levels, Faith, Hope, and Charity-pale, European women-are posed in a triangular tableau around a marble and gold tabernacle. Like the reredos, the frontispiece runs from floor to ceiling, creating a hallucinatory space, a basilica that seems to invite me in. Some scenes from Hitchcocks’ Vertigo were filmed in the mission church, I recall. How appropriate.

I retrieve from my backpack a slim library text, containing a map for the statuary displayed on the reredos, and sit in the right front pew. Of all the holy men and women-St. Clara, St. Francis, St. Joachim-the images of St. Michael and Our Lady of Angels most pique my interest.

The majestic prince of angels, Satan’s expeller, Defender of the Faith: St. Michael wears a short warrior tunic showcasing his alabaster legs in golden boots. His cheekbones, narrow jaw, and snow-white neck seem modeled on the maidenly features of Artemis. Raised up on a pedestal, he occupies the highest central niche, perhaps one foot away from the ceiling’s rafters, where white and gray stripes jag like lightning bolts. If the Archangel commands this sacred space with his raised sword, it’s likely due to his bisexual appeal.

Our Lady of the Angels, centered on a gold and cerulean pedestal, stands supported by cherubs arranged like a wreath. Her loosely wrapped mantle and gown are sculpted in flowing motion, as if lifted by a breeze. Their fabric is of gray and olive tones, more fitting for Earth than the heavens, but her golden crown heralds her stature in celestial realms. With the crown’s added height, the Virgin defies the boundaries of her niche and seems to rise. She is Immaculate Mary, assumed. I recall lines of her antiphon, which I learned in Catholic school: “Hail, Queen of heaven! Hail, Mistress of angels! Hail, root of Jesus! Hail, portal of Earth’s sacred light!”

Who is this multi-tasking Mary? As a child attending my parish church, I blessed myself with holy water and then entered the nave to elderly Slovak women reciting the rosary. At Mass, I contemplated the Virgin’s multiple images throughout the building, many on side altars. Balanced on a globe, Mary’s bare feet crushed the Serpent’s head. Or she parted her mantle to reveal her heart pierced by swords. Or posed in a pieta, she cradled crucified Jesus stretched across her lap.

Priests wove her modern lore into their sermons, describing her apparitions in Europe to peasant children at Fatima and Lourdes, where she was said to perform miracles. Above Fatima, she turned the sky into a prism, by spinning the sun. At Lourdes, she directed a girl, Bernadette Soubirous, to wash herself in mud, and then afterwards opened the ground so a spring flowed, with curative waters. On the reredos, she presses her hands together in prayer, even as she ascends to paradise.

Ave, Mother most dutiful! Your tasks are never fulfilled. All around the globe, who among the faithful kneel in awe of your apparition? The Catholics of Nicaragua, Rwanda, or Medjugorje in the former Yugoslavia? Your miraculous visits to countries routinely cleansed by war and genocide are sanctioned as “true” by Church ecclesiastics. How might I interpret your presence at Mission Dolores?